As part of expanding multi-modal connections in the I-66 corridor, the Virginia Department of Transportation (VDOT) and its private partner, I-66 Express Mobility Partners (I-66 EMP), have worked closely with Fairfax and Prince William counties, bike advocacy groups, homeowners associations and local residents to incorporate new and improved trail facilities as part of the overall Transform 66 Outside the Beltway Project. This includes trails and connections on reconstructed roadways that cross I-66 and a shared-use path running along the I-66 corridor from Dunn Loring to Centreville.

VDOT developed the concept plan for the I-66 Trail consistent with local jurisdiction trail plans. Trail design features including the trail alignment and connections along the corridor were included in the overall project design plans at public hearings held in November 2017. VDOT received many comments opposed to placing the trail on the residential side of noise barriers in locations where the trail passes near homes. Those comments led to a contract requirement to locate the trail on the highway side of noise barriers in areas adjacent to homes. VDOT also received many comments concerned about placement of the trail alongside the interstate, which led to design changes around the type of barrier that would be adjacent to the trail.

In coordination with Prince William County, a future trail to be constructed by others has been proposed on parallel roadways. Two segments of this trail adjacent to proposed park and ride lots at University Boulevard and along Balls Ford Road will be constructed as part of the Transform 66 Project. 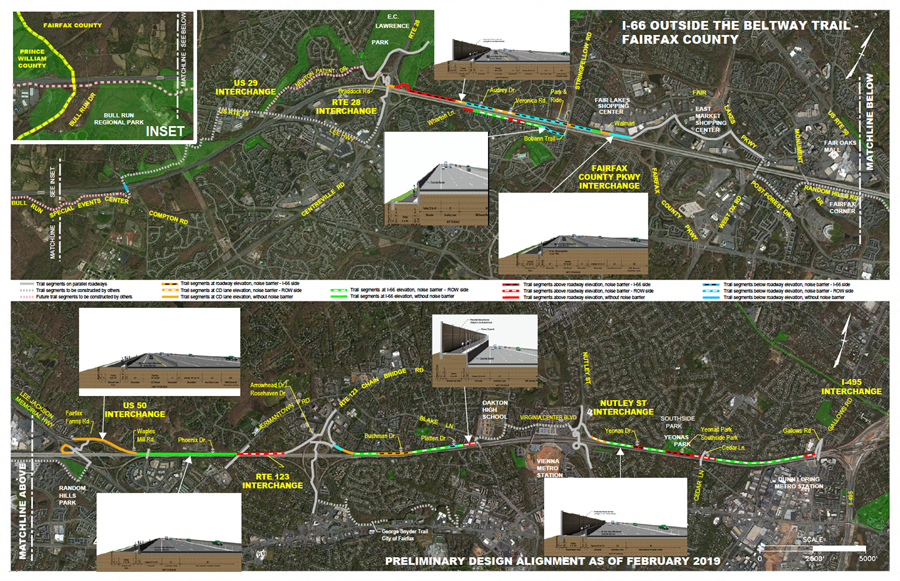 The bike trail will be 10-feet wide, with a two-foot-wide shoulder on each side, in accordance with VDOT standards. In certain space-constrained locations the trail width may be reduced to eight feet with shoulders.

Access to the trail will be provided about every half-mile. The 66 project team has worked with Fairfax and Prince William counties to identify the best location of each access point. Preliminary access points for the trail between Route 29 and Gallows Road are shown by green arrows in the Conceptual Trail Plan (see above map).

Other Nearby Trail Projects

Additional nearby trail projects are part of building out the trail network along I-66. These other projects include:

VDOT and Fairfax County are working jointly to improve bicycle and pedestrian access in the area of the Vienna Metrorail Station. A series of improvements along Country Creek Road/Virginia Center Boulevard between Sutton Road and the ramp to westbound I-66, and along Sutton Road between Blake Lane and Country Creek Road are planned, with construction anticipated to begin in late 2024 and be complete in early 2026. Construction of interim improvements is planned to be complete in late 2022 to coincide with Transform 66 Project progress. Learn more about these improvements in this presentation. Learn more about this multi-agency project here.

Existing sections of sidewalk along Post Forest Drive and Random Hills Road will be upgraded to 10-foot-wide shared-use paths. Crosswalks will be added and curb ramps improved in this stretch located between Monument Drive and West Ox Road on the south side of I-66 to benefit people making short trips in the neighborhood and longer trips along the I-66 Parallel Trail. Construction is planned to begin in 2025. Learn more here.

The Washington & Old Dominion Trail (W&OD Trail) near Idylwood Park (between Virginia Lane and the trail bridge over I-495) in Falls Church has been permanently shifted to a new alignment as part of the Transform 66 Project. A new noise wall will be constructed between the trail and I-66 West that will tie in to the existing noise wall that is being reconstructed.