Environmental considerations are important elements of the Transform 66 Outside the Beltway project. During the project's final design process, team members are working on:

Noise Walls and Final Noise Analysis. The project team conducted a noise analysis of the final project design to determine where new noise walls are feasible and reasonable. Additional information about the final noise analysis and construction of new and replacement noise walls can be found here.

Stormwater Management Facilities and Erosion and Sediment Control. Measures are being developed and implemented along the project corridor to protect water quality temporarily during construction and permanently after the project improvements are completed.

The project's design is based on conceptual design plans for the Preferred Alternative that was presented in the Tier 2 Final Environmental Assessment (EA), approved by the Federal Highway Administration in June 2016. 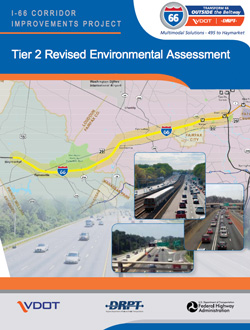 The Federal Highway Administration (FHWA) issued a Finding of No Significant Impact (FONSI) in June 2016 for the Transform 66 Outside the Beltway improvements. The FONSI was issued after review of the Tier 2 Final EA prepared by VDOT and the Virginia Department of Rail and Public Transportation (DRPT) in partnership with FHWA. The Tier 2 Final EA described potential effects of the proposed improvements on air quality, noise, neighborhoods, parks, recreation areas, historic properties, wetlands, streams, and other resources. The document also reflected the results of extensive coordination with the public and with federal, state, regional, and local agencies and stakeholders. The FONSI took into account the intensity and context of the environmental impacts and included a number of environmental commitments to be carried forward during further project development. Click to view the FONSI and Tier 2 Final EA and supporting technical documents.

The Tier 2 Final EA described above was a follow-on to the Tier 1 EIS. In summer 2011, VDOT and DRPT, in partnership with FHWA, began work on a Tier 1 EIS to define existing and future transportation conditions and needs within the 25-mile I-66 Corridor from Route 15 in Haymarket to I-495. This study identified a range of conceptual-level improvements that would address those needs, and evaluated the potential effects of these concepts on the natural and human environments. A Tier 1 EIS differs from a traditional EIS in that it focuses on broad issues, such as purpose and need, travel modes (bus, carpool, rail transit, car, etc.), technology choices, and the general locations of proposed improvements.